I come from the ‘Rangei hoza’ (Rangei clan) and ‘bhuter gusthi’ (ghost group) of Chakmas, which means my paternal side of the family is a descendant of a ghost. This must sound quite exotic to people who do not belong to the Chakma community. Chakmas comprise of less than 0.3% of Bangladeshi population and mostly live in the Chittagong Hill Tracts (CHT). My identity struggle as an ethnic minority began at an early age. Unlike many other indigenous kids of CHT, I went to schools in different parts of the country due to the nature of my father’s job. I ended up being the only Chakma kid in my class in every school I went to. I figured I was somewhat different from other children. Usually it was not my behaviour, rather my flat nose and slanted eyes that gave it away. It was easy to stereotype me. Kids would often chant “Chakma! Chakma!” if they saw me pass by. Sometimes I would be asked whether my people (Chakmas) ate frogs and snakes, lived naked in the jungle and spoke Chinese language. These things upset me back then. It felt awful to be different and I did not exactly embrace my Chakma identity with a sense of pride or happiness. END_OF_DOCUMENT_TOKEN_TO_BE_REPLACED

February 14, 2013 was a different day in Bangladesh. People from all walks of life took to the streets across the country. Women, men and children, countless adorned in red, joyously singing and shouting and demanding an end to a culture. A culture that has been “normal”, “private” and more importantly, “silent”. A society, which otherwise reflects significant lack of prioritisation on violence against women issues, came together to show their support. Almost 3 million men and women, through more than 335 organisations, occupied the streets in more than 40 locations in Dhaka and across all the 64 districts in Bangladesh, demanding an end to violence against women with joy, empowerment and exuberance. There were human rights activists, factory workers, union workers, lawyers, bankers, parliamentarians, tea garden workers, UN employees, school children, university students, farmers, teachers, domestic workers, adivasis, artists, writers, local government personnel, homosexuals, heterosexuals and hijras (transsexuals), young and old, survivors and allies.

“Silence — NO MORE”, they chanted, hoisting red banners, their red clothes signifying the colour of fire, of rising and more importantly, of power. ‘NO MORE violence against women,’ they sang in unison as they took to the streets. These were people who stepped out of small shops, factories, construction sites, stations, schools, universities, offices, homes, corporate houses, banks all across the country. END_OF_DOCUMENT_TOKEN_TO_BE_REPLACED 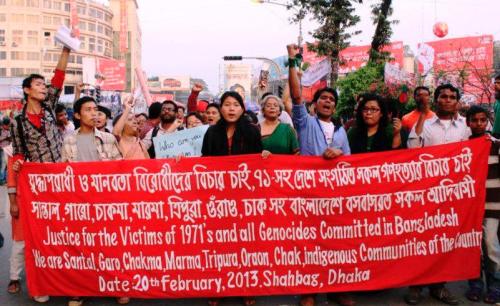 When the Shahbag protest started, the spirit of the movement and the unity with which people gathered made me feel something extraordinary. I personally do not support death penalty, but like many, I was disappointed when the Kader Mollah aka the Butcher of Mirpur did not get the supreme punishment according to the law – fasi (death sentence). Many human rights activists who have worked with international processes of human rights would not openly support the death penalty. Research studies have shown that the death penalty does not prove to be a deterrent to rape or murder. However, if Kader Mollah were to be hanged, I do not think the activists would start a movement against it.

We must recognize the other dimensions of the Shahbag movement, the dimension other than the demand of capital punishment. Although Shahbag is not the first protest I went to, it is in a way extraordinary. Because it is for the first time in the last four decades, a huge number of apolitical people have come together to challenge something that did not feel right. This gave immense hope to people for change, for ending the culture of impunity and demanding accountability from the bodies that are responsible for implementing our laws. END_OF_DOCUMENT_TOKEN_TO_BE_REPLACED

“We, the people of Bangladesh, having proclaimed our independence on the 26th day of March, 1971 and through a historic struggle for national liberation, established the independent, sovereign People’s Republic of Bangladesh; Pledging that the high ideals of nationalism, socialism, democracy and secularism, which inspired our heroic people to dedicate themselves to, and our brave martyrs to sacrifice their lives in, the national liberation struggle, shall be the fundamental principles of the Constitution.” (1) – The Constitution of the People’s Republic of Bangladesh 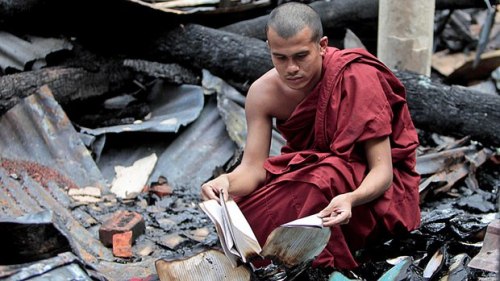 Although secularism is one of the four founding pillars of the constitution of Bangladesh, the recent attacks on the Buddhist and Hindu minorities make us question its practice in reality. As I write this piece, reportedly 19 Buddhist and Hindu temples and more than 100 houses have been looted, vandalized and torched in Ramu, Patia, Teknaf and Ukhia of Chittagong over the last two days by religious fanatics, allegedly because a Buddhist man was ‘tagged’ in an Islam-insulting Facebook photo by an unidentified person. Following the rampage, Section 144 was imposed in Cox’s Bazaar’s Ramu Upazila, prohibiting assemblies of more than five people in the concerned areas. (2) END_OF_DOCUMENT_TOKEN_TO_BE_REPLACED